Thanks to the recent ferry strike that put a stop to services between Roscoff and Plymouth, I’ve just returned from an unexpected road trip across France, Spain and Portugal. And, as a result, I urge all parents of pre-school children to down tools and spend a month on the road. 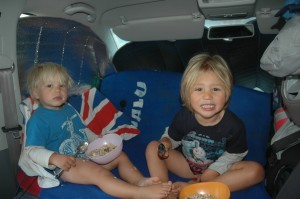 Having breakfast on the front seat of the van

Travelling with kids doesn’t have to mean years of saving or running up huge debts. I’ve witnessed too many families fail to set off on a ‘big trip’ prior to their children starting school, because they claim they haven’t been able to find the time or money. And while I agree that the first few years of having children can be expensive and demanding, travelling overseas can be affordable, and the best time to go is while the kids are still young, malleable and not restricted by school holidays. Of course there are nappy changes and tantrums to deal with wherever you are in the world, but any stress is far outweighed by treasured moments such as waking up by a wild seascape, hearing your 20 month-old greet strangers in a foreign language, or helping a three year-old trace your route across three countries on a map. 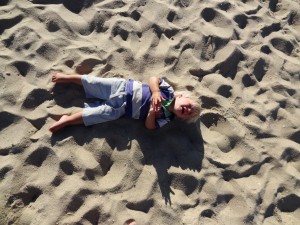 You still have to deal with tantrums on the beach

When I left for the South of France in September – Vieux Boucau, near Hossegor, to be more exact – I thought an eight-day camping trip with a three year-old and toddler would be enough of an overseas adventure. Beyond the ferry trip and 8-hour drive I imagined only long, lazy days on a beach doused by sunshine and surf. [Snigger.] Yes, there was sunshine and surf, and the days were long, but camping with two young children will never involve lazy days. There was also a lot to learn about the logistics of family camping, dealing with wild toddlers in pine forests, coaxing them over sand dunes and surviving storms under canvas. All of which will be covered in subsequent blogs. 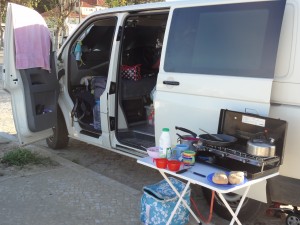 However, when the Brittany Ferry strike left us stranded in France (that or undergo a hellish 1,000-mile detour via Calais and Dover) the situation inspired us to extend our adventure and chase the sun further south. Despite being October temperatures were still soaring in Portugal, so we decided to ‘free camp’ our way down there. With the four of us just about able to sleep in the van without erecting the awning we’d save on camping fees, which left just fuel, tolls and food to fork out for. 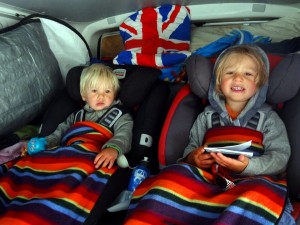 All tucked in for a night drive

There surely aren’t many times during family life where you can put work on hold, the kids aren’t restricted to school holidays and they’re still young enough to put to bed on the front seat of an unconverted van. So, the French plonk flowing, the moon lighting the tops of the pine trees and the ocean playing in the background, we phoned home to sort out a dog-sitter then got out the map and planned our route through Spain. 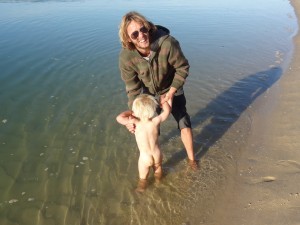 Ablutions in the river

Consequently, over the last month I’ve acquired some useful information for any parents planning a road trip with toddlers – from free camping spots and essential van kit, to ferry travel tips and surviving van life with tots in tow. Over the coming weeks I’ll be blogging the best bits of the trip and sharing a few gems of information, hoping to inform and inspire families to break out and enjoy van travelling on a budget. 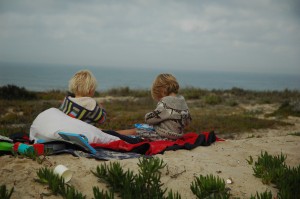 Picnic spot with a view