There’s not much you can say about January in the British Isles, is there? It’s just a month best forgotten. Best spent somewhere else. Preferably somewhere you can pad barefoot from your bed to the beach and feel the salty caress of the sea sans wetsuit. 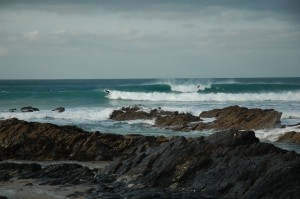 We’ll stop there, because those days are long gone. (They will return, she reassures herself before going on.) But while the wetsuit- and fancy-free days may temporarily be behind me, life by the sea certainly isn’t. I haven’t padded beachward barefoot in the last month (except in my dreams), but I have stomped to the seafront through wind, rain and hailstones. Pushing half my bodyweight in a double buggy I haven’t had chance to grow the usual January muffin-top, and through the snot, tears and sleeplessness of child-rearing my energy levels haven’t hit nearly rock bottom for this time of year. So as February stirred its sunny, cold head, I could only reflect that, this time round, January hasn’t been half bad. 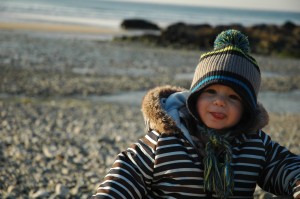 Be it the ions afloat in sea air, the vitamin D top-ups when the sun poked through the clouds, or my maternal levels of optimism (now flagging if I’m honest), my daily trips 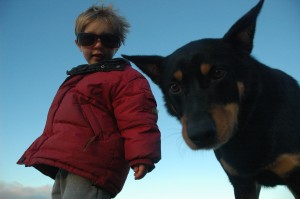 to the beach have kept me and my kids in good (ish) health and spirits. Shame the dog is turning into a curmudgeonly old bugger, but even he wags his tail and bounces around like a pup when the sea’s in sight. And if it wasn’t for him, no doubt we would’ve spent far more time hunkering by the fire doing jigsaws; so he’s vital to the feel-good factor even if he doesn’t know it. 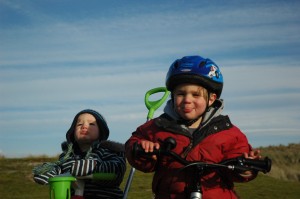 So what of the kids who have seen more of the indoors this winter – will they fare better or worse than my offspring I wonder? They have probably been warmer and drier, and may have had less to whinge at their parents for. Mine, on the other hand, have whinged aplenty as I’ve rugged them up, stuffed them in the buggy and flown it like a kite in the drag of gale force winds. They’ve cried as their fingers thawed after an afternoon in the rock pools, scrambled up cliff paths with boots filled with icy seawater and thrown bikes in a rage when riding into a head wind. I’d like to think I’m toughening them up into outdoor lads, but the two year-old simply hankers for the 4 o’clock moment when we get in the door and he can turn the telly on. 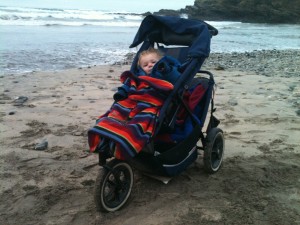 But I do feel like we end each day with rosy cheeks and some sense of adventure. An inkling of having done something with each grim, January day. So the month hasn’t been awash with misery and elephant grey skies. Instead it’s been a living diary of Cornish beaches in their wildest, least visited, states. And on the days where I’ve been puked on, sleep-deprived and moaned at, and my optimism has been caving in, I’ve had a moment of perspective and a bigger picture to reflect on. Which has made even the toughest days of single motherhood bearable. 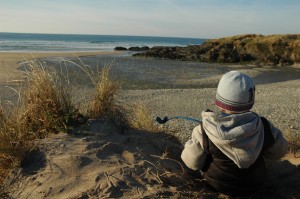 So while I’m glad to see the back of January and ready to cheer on spring, the depths of winter won’t be forgotten. And when I’m scanning websites for the perfect winter escape, for now at least, I might just have to keep my winter boots on and look a little closer to home.