Stride to the summit: a child-free adventure

Although the world is undoubtedly more of an adventure with kids in tow, there are times when every member of the family must set out and explore without four-stone of small children and all their paraphernalia. So when the chance came my way to climb Snowdon on New Year’s Eve I did what any good mother would do: handed the kids over to Dad and hoofed it up to Snowdonia with the hound. 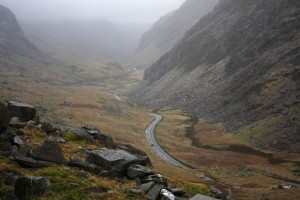 Focussed on the mission to scale one more mountain before the year was up (not a metaphorical one this time), I’d forgotten how the landscape drama of Snowdonia National Park simply smacks you into place as you roll into the midst of its fog-shrouded peaks. Having not ventured into this territory since BC (Before Children) I swiftly made promises to return more often, with walking boots, children and mountain bikes in tow. No doubt the time will come when my offspring will be scampering to peaks ahead of me, but for now it was not the time, nor the weather, to be lugging kids in backpacks to the summit of Snowdon.

Not having attempted any serious expeditions away from the beach since BC I wasn’t even equipped to get myself up a mountain, yet alone two tots. Dressed in ski trousers and surf-brand jackets me and my travelling companion certainly weren’t waterproofed to the purpose of the moody, wet mountain we were faced with. Yet being ill equipped only intensified the challenge, especially teamed with the fog, high winds and persistent rain that saw out 2011 and brought in 2012. Setting off up the Pyg track we were quite smug to be leaving the flock of hikers (all well kitted out with Berghaus, North Face and walking poles) heading out along the flatter, wider terrain of the Miner’s track. But smugness soon subsided on the steeper terrain, where breathlessness shushed conversation and only the super-fit scampered past and disappeared off into the mist. 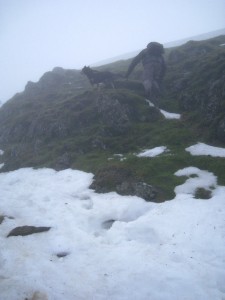 The walk was symbolic of the year gone by: tough in parts, with decent stretches of skipping along taking in the scenery (in this case glimpses of valleys and lakes between scudding clouds), before the wind and rain charged in again and took my breath away. As we neared the peak – using the hound to pull us up some of the technical terrain – the freezing fog bellowed past jagged rock silhouettes, conjuring up the atmosphere of Mordor. It wasn’t a place to hang around if you didn’t want to get blown off the highest peak in Wales, but it was an awesome place to get to. Quite like 2011 really; not a year to hang around, but an awesome year in its own right. 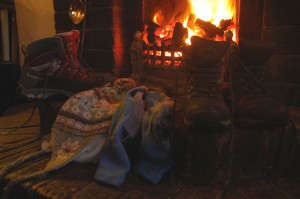 Met with the beaming smile of an eight year-old on the descent I realised it wouldn’t be long until my boys could join me on more extreme adventures; they won’t be babies for long. Which makes it all the more important to enjoy our toddler-led adventures in the meantime, for as they grow older they will turn their gaze to bigger challenges and cease to express wide-eyed excitement in everyday minutiae – tractors, swings, the sea, a rainbow, a trip to the swimming pool. And so for 2012 I will cherish the moments spent in the Great Outdoors with tots in tow. But as one year ended and the next rolled in I also cherished child-free time with my walking boots drying by the fire, a rambling pint in hand and a decent lie in!