Miracle at the Minack: Waiting for Godot

Aren’t we always waiting for something, then when it comes along it’s not quite what we expect? Since hearing about Miracle Theatre Company’s summer performance of Waiting for Godot, I’d been waiting for weeks to take my seat in the ocean-side amphitheatre of the Minack Theatre. 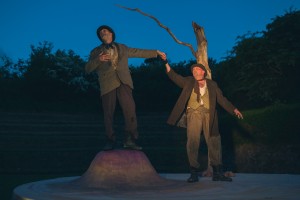 To be honest, I had no idea quite what to expect. But then isn’t it true that many of us don’t seem to know quite what we are waiting for, or how it will change things when it comes along. Much like the main characters Gogo (Estragon) and Didi (Vladimir), who spend the entire play waiting for Mr Godot, despite not having the foggiest idea who he is, or what he is going to do for them.

You may surmise that a play about waiting for time to pass, waiting for something to change the monotony of life for two tramps, could err on being boring. Indeed, Beckett’s classic is often referred to as a play in which very little happens. So before taking my seat (a hamper of goodies to feast on, the sea mist thickening in the background) I didn’t dare hypothesize about how it would be translated into a thrilling stage production.

However, like much of the multi-generation audience in attendance, I was unable to stifle my laughs from beginning to end. Wholly engaged by expression and humour, the symmetry of the language and the desperation of life, I was so far drawn into Gogo and Didi’s barren landscape that I forgot about the stunning, sea-wrapped scenery beyond the stage.

If you sit and wait for a beginning, a middle and an end, then you’ll be no better off than Gogo and Didi – for you will not know if, or when, it passes you by. Yet what the play misses in structure and movement, it more than makes up for with hilarious dialogue that takes you on a journey through the futility of life. Like an old married couple, the two tramps have put up with each other for half a century: one of them philosophical, the other anxious and forgetful, they pass the time quibbling about all manner of things from personal hygiene to the human condition. Between occasional bouts of japing, singing and dancing, the sadness of them sticking together to stave off fear and loneliness breaks through the comedy. 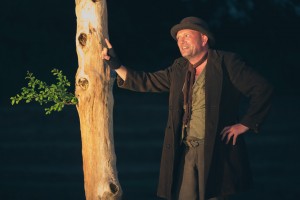 Just like in life, there’s a fine line between comedy and tragedy, but don’t try and read too far into the meaning of the play – after all, Beckett himself never offered any. However, while Waiting for Godot doesn’t make its purpose – or indeed the purpose of our own lives – clear, as it picks on the triviality of our existence, it leaves you feeling both the humour and unhappiness of the human condition in equal measures. 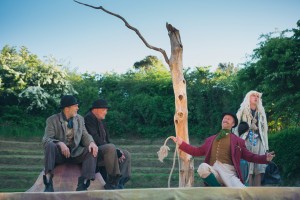 This entry was posted in Blog and tagged Minack, Miracle Theatre Company, Waiting for Godot. Bookmark the permalink.