Marazion to Penzance: a bike ride for toddlers

I own a high-tech mountain bike that took me on a few fast-wheeled adventures BC (Before Children). Now on the rare occasions it sees the light of day it’s with a double trailer in tow on the flattest route I can find. So you can understand that I’m keen to get the kids pedalling pronto so we can all get back to the more exciting downhills. It’ll be a while yet, what with the one year-old still being on a push-along trike. But the two-and-half-year-old is clocking up a few miles over the dunes on his balance bike. So things are looking up.

We’ve got a few bike and trailer rides earmarked for the coming weeks – Devon’s Tarka Trail and Cornwall’s Camel Trail being the fave. However, it’s rides that get the wee ones in into biking that I’ll be focussing on this summer – short, wide, level trails where they can get their independence on wheels. And preferably where I can take in some decent scenery while taking a stroll and dealing with the inevitable toddler meltdowns. 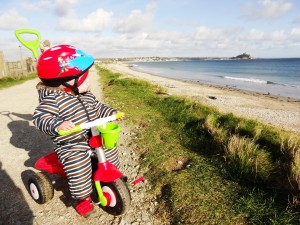 Great scenery and a wide, flat trail for the trike. The Penzance to Marazion trail is toddler-friendly bike territory

This week we’ve been on the cycle track between Marazion and Penzance. Flanking Mounts Bay this seaside beauty runs between the beach and the train tracks. With the fairytale castle of St Michael’s Mount on one side and trains chugging past on the other, this is the sort of adventure most kids’ (mine at least) dreams are made of. While the helicopter to the Isles of Scilly still departs from Penzance you’ve got the excitement of that whirring overhead as well. This is serious toddler eye candy. Plus the beach is dog-friendly and there’s cracking views for me to set eyes on. 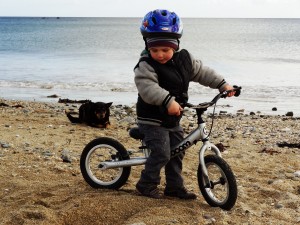 Oli detours from the track onto the beach

On the practical side it’s a short and very flat trail, with a free car park at Long Rock. We follow the section of the trail from Long Rock towards Penzance, stopping at a grassy beachside pit with a stone bench – perfect for the children to collect pebbles, clamber on the rocks and picnic. Being so close to home I should think we’ll be here an awful lot this summer. Perhaps when the sun’s really shining we can extend our route a little further into Penzance for a dip in Jubilee Pool lido. 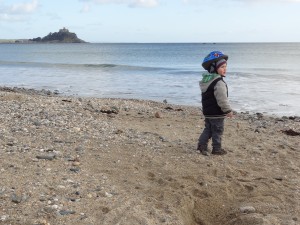 A pit-stop to collect pebbles on the beach

Do you have any other toddler friendly bike rides to recommend?