The sun turning our cheeks ruddy, the lolling boat having a soporific effect, we could have been cruising between Greek Islands. Instead, somewhere between Devon and France, we were the only family basking on the top deck of the ferry; our toddlers lulled to sleep by the rocking motion, while the rest of the passengers jostled for a table in the café or a seat in the movie theatre. 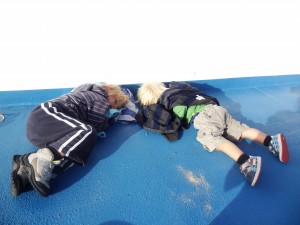 Two tired boys asleep on the top deck of the ferry

Where else to start than at the beginning and end point of the trip? On the ferry. After all, it was the Brittany Ferry strike that was pivotal to our unplanned adventure from the South of France to Portugal in the first place. Originally we’d planned to cross from Plymouth to Roscoff for a 10-day camping trip near Hossegor. At 6 hours long, it’s a much shorter and cheaper option than taking the ferry further down to Santander, but where you save money, you’ve got to fork out time and fuel costs for the 8-hour drive south once you reach France. 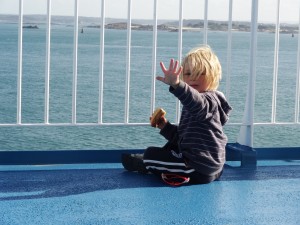 Being on any sort of boat can be exciting stuff when you’re a toddler. So, as expected, the first glimpse of the ferry wound the wee boys into a frenzy. Although there’s plenty of room to let them explore onboard, unless you want to put up with hours of chaos and fellow passengers casting you disapproving glances throughout the journey, it’s wise not to unleash crazed children straight onto the vessel after being car-bound for hours. So, after a two-day drive back from Portugal, we released the restless tots on the sand dunes at Biscarosse before the last leg of the trip to the port. 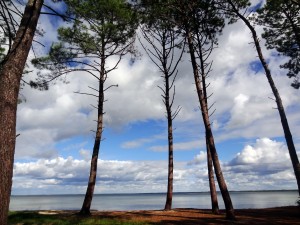 Biscarosse – a scenic break before the ferry trip

Once the wild things have got over the insurmountable excitement of boarding and waving goodbye to land, you’ve got a good few hours left to entertain them, which is a far easier task on a boat than on an plane. Firstly, make the most of the natural distractions – find the helicopter landing pad on the top deck, spot the lifeboats and explore the different levels to find all the family-friendly features (which, these days, include the likes of movie theatres, toddler play zones and kids’ TV lounges). It can be tempting to pack an entire toy box to keep toddlers entertained, so on the outward ferry trip ours delved into a bag crammed with modelling clay, crayons, books and trains – most of which got strewn around the boat. On the way back they were each given one new toy once we’d boarded, which kept them happy for most of the journey. 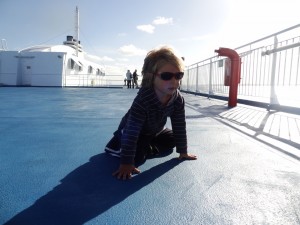 On the helicopter landing pad

You might be lucky to stake out a good base in one of the seating areas, but lugging your stuff around as you chase wild things between penny-pinching distractions can be a hassle, so I’d rather put extra money into having a cabin. Whether you’re travelling by day or night, a cabin is an ideal base to dump a few toys, coats, spare clothes and food – which means you can save on buying supplies onboard). Most cabins have an en suite bathroom, so you can all have a soothing shower and change of clothes before the onward trip. Of course there are beds if you can get over-tired children to nap, but if it’s daytime and you can’t, at least they can play in a confined space where you can put your feet up without having to be super-vigilant. 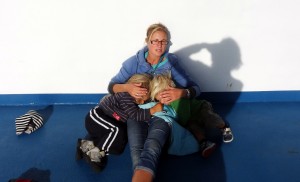 All asleep on deck while the hoards were inside

Despite preparations, a nap on the top deck, a cabin to rest in and a hearty stash of toddler-friendly snacks, the little travellers were still predictably rambunctious. The only effective discipline technique to keep them under control was simply to tell them that the Captain was coming. Weeks later, I only have to mention the Captain, and the youngest is quaking in his teeny boots and sitting quietly on the nearest chair with his hands in his lap. 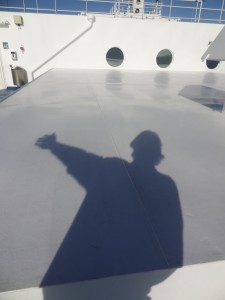 Once the joys of the ferry ride were over (and it is a joy compared to plane travel), the final step was to be prepared for our onward journey. With an all-night drive ahead on our outward trip, we were tired and ill practised at putting the kids to bed in the van; hence their moans of discomfort that came in rounds until we stopped at 5am. A month – and many night drives – later, we had comfy, happy children while we drove in peace through the darkness. In the next blog I’ll share a few of the magic ingredients that led to stress-free night drives and and helped us all survive long car trips with kids. 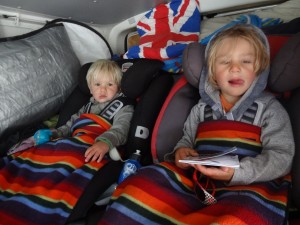 Tucked in for the onward night drive