Whenever we plan a big day out, it seems to start with an epic drive. After all, on a day off it’s always good to break the boundaries of your local area while you’ve got time. Or is it? What about the old adage of taking what’s familiar for granted? Which is we so often overlook what’s bang on the doorstep. So, before you fill up the fuel tank and flit off to further horizons, take the time to explore where you live. After all, there’s usually a good reason you call it home. 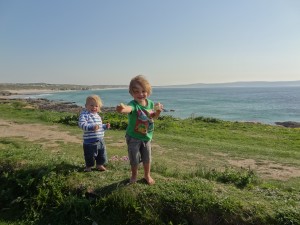 Last week I barely broke the boundaries of my local beach. After all, being three miles long there’s plenty to do there (even in the grizzly weather we’ve had to put up with lately). On a Friday morning I usually take a 20-minute spin to the Blue Bar, where, with cracking sea views, wi fi, cliff walks and a tidal pool, I can a fit a mini holiday into a couple of hours. But this week I stopped to walk the hound at Godrevy, just a short jaunt along the bay from home. When I got there the surf was small and perfect, begging me to abandon any resolve to get some work done and I soon found myself wetsuit clad, paddling out to catch a few waves. Sat on my board pondering the scenery from the lighthouse to St Ives, I wondered why I ever felt the need to escape this beautiful place. 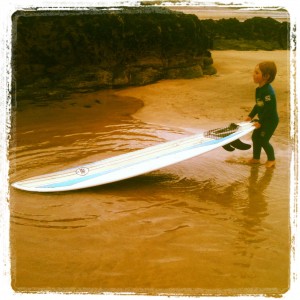 The same afternoon, kids in tow, we ended up back at the same beach, a few footsteps closer to the lighthouse. Not for the surf this time, but because, where barnacled rocks protrude from the pearly sands, the rockpools are sheltered and perfect for toddlers to take a dip. Wetsuits on, the drizzle didn’t matter as we towed the kids on a surfboard across a big pool named the Sheep Dip. Tear-inducing tumbles into the water, messing around in the rushy river, rock climbing (more tears and grazed knees) and paddling the white water of the surf, we had a veritable adventure (considering most families we knew were huddled in front of CBeebies cradling cups of tea) before warming up with hot chocolate and marshmellows at the Godrevy Café. 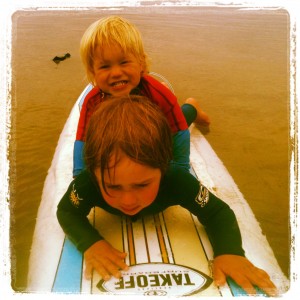 Waking up to yet another wet Saturday my rainy-day-with-kids inspiration had been driven to an all time low, so I decided a simple walk to the beach was the best activity for tearaway toddlers, bleary eyed grown ups and a hound full of beans. Instead of the ten-minute stroll to dig our toes in the sand (make that an hour at toddler pace), we put the wee ones in backpacks and strode the three-mile stretch to Gwithian. Not only did I appreciate the wave-lashed scenery left empty by holidaymakers deterred by the rain, but I also enjoyed the work out of padding over the dunes with a 3 year-old strapped to my back. Surely it would take a few gym workouts to match this level of training. A fry up in the Jam Pot Café  and a good stomp home and we’d thoroughly earned an afternoon movie on the sofa. 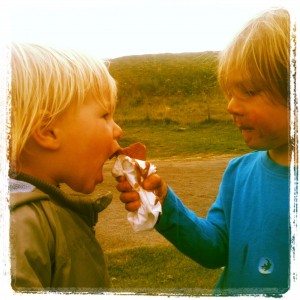 Sunday’s adventure wasn’t quite so eco-friendly, as this time we did at least start the car. The sun shining (a welcome surprise these days) we set off Gwenvor, far out west, where we hoped for a day of surf and sandcastles. Alas, it was not to be. In true Cornish style a thick sea mist blew in so the beach was hardly visible from the car park. Bikini weather it wasn’t, so we wound back up along the coast, where, by now, there seemed no escape from the gathering clouds. Eventually we pulled up at Long Rock, near Marazion, just a 10-minute drive from home. It’s not Cornwall’s most rugged beach, but its beauty curls gently around the sea-wrapped St Micheal’s Mount. 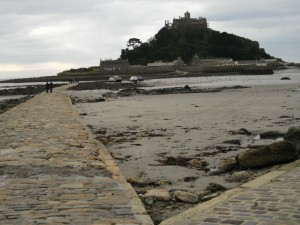 Having never crossed the causeway to the fairytale castle, it seemed like the perfect day to venture across. First of all we thought about paddling across on a sit-on-top kayak and tried to hire one from Bay Kayaks, but it turned out children have to be at least six, which mine wouldn’t pass for at 18 months and three. “Can we swim to the castle, mummy?” asked the three year-old; an admirable suggestion from one who couldn’t swim. However the tide was out and the causeway uncovered, so there was no need for such a venture. We did all have a swim anyway – the gentle south coast waves and the castle in the background reminding me to come and play here more often. We never did make it to the castle (the rest of the afternoon squandered to toddler tantrums, ice creams and spotting boats, trains and helicopters from the promenade).

After a pleasant weekend so close to home I feel as if I saw where I live through the eyes of a visitor and realised that there’s so much to do within minutes of my front door. I’m not saying I won’t be doing any more epic drives, just that I’ll be out exploring my local area more often than I’ll be filling up the fuel tank.