Crealy – is it really Cornwall’s ‘No.1 Family Day Out’?

I’m not the sort of mum that often takes the kids to theme parks. As far as I’m concerned the beach and the woods are enough for all the thrills and spills any small, wild things need: between the rockpools, the waves, the sand and the trees, there’s plenty of adventures to be had on bikes, on foot and in wetsuits.

In fact, what I remember about going to the likes of Alton Towers and Chessington World of Adventures when I was a kid (lucky me), is not only white-knuckle fun, but also long, boring queues and stressed-out parents. Now that I’m a grown-up I can fully appreciate how herding a pack of children in large crowds, and spending a lot of money for the pleasure, can work you into quite a huff. 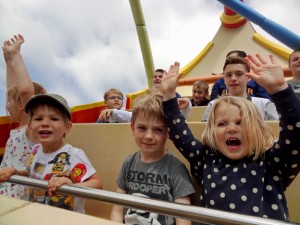 So when the children got their hearts’ set on a trip to Cornwall’s Crealy Adventure Theme Park, I didn’t leap into the air and cheer like they did when I finally buckled and said we could go. In their crazy little minds Crealy was the holy grail of fun. In my mind it was the sort of place that I’d need to brace myself for crowds, chaos and queues. As it turned out, in many ways they were right and I was wrong.

Unlike many of Britain’s mainstream theme parks, Crealy isn’t a monstrous city of attractions where you spend every moment tracking knee-high children in waves of people. It’s quite petite, with lots of green space, lakeside lawns and play areas between the bigger rides. Even on a sunny day in the school holidays it didn’t feel rammed, and while it turned out be the perfect place to give small-ish kids a little bit of independence without losing them, it dished up just as much fun as they had imagined while making quite a relaxing day out for the grown ups, too. 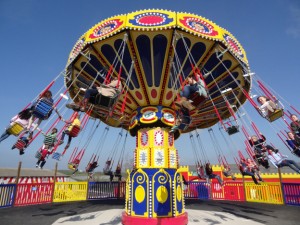 As soon as we were through the gates the children were straight onto the new Wave Rider – a high-flying carousel of swings that’s a real crowd pleaser. Like many of the rides at Crealy, it’s not too big-and-scary for younger kids. In fact the pirate ship, the roller coaster and even the raging rivers weren’t too terrifying for thrill-seeking four year-olds, yet were still a hit with ten year-olds. It was only The Blast and Thunder Falls that the younger kids shied away from, and they didn’t dare spend too long in the haunted house either.

You see, part of the joy of Crealy is that it’s utterly geared up for smaller children, to the extent that all of the new Swampy and Dina Land is chocked with mini classic rides – such as spinning teacups and a big wheel – made for toddlers. Even my 10-month old got his fair share of fun. And while there’s plenty of rides for all ages, these attractions are interspersed with all sorts of themed play areas including an eco-adventure park, a fun fortress, super-fast slides and an undercover soft play area. 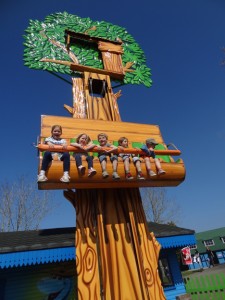 Another dimension to Crealy is its focus on pets and wildlife: you can be whizzing down the Demon’s Drop slide one minute, and spotting snakes and caimans in Crocodile Corner the next. New to the pack are the meerkats and leafcutter ants, but whether you’re patting the ponies, watching the emus or finding out more about some of the world’s most exotic insects, the wildlife adds a more relaxing and educational touch to a family day out.

So does Crealy measure up as Cornwall’s no.1 family day out? Personally, I still prefer the beach, second to which comes or a National Trust garden or the woods. But if you asked the children whether they’d prefer to don their wetsuits and hit the waves or spend a day out at Crealy, they might just turn their backs on the beach and dash back to Cornwall’s favourite theme park without a second thought. 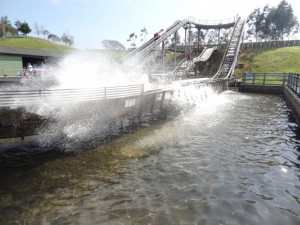